When an artist begins writing a new song, one of the first choices they must make is whether to write in a major or minor key. Songs in minor have a fundamentally different sound from songs in major.

Because of this fundamental difference, it can be fun/interesting to hear how your favorite songs sound when they are switched from major to minor or vice versa. For instance, “Hey Jude” by The Beatles is a happy song written in a major key. Take a listen to the first four bars:

“Hey Jude” by The Beatles

It’s quite a different sound, right ?

Hear (Almost) Any Song in Any Key/Scale

If you want to hear how other songs sound when switched from major to minor, starting today, all 12000+ songs in Hooktheory’s Theorytab Library can now be played back in any key or mode. Theorytabs are tabs that show the theory behind popular songs; they remove the details of instrumentation/arrangement, allowing you to hear and understand the pure chords and melody that make up a song. Before you explore the library on your own, we’ve curated a couple cool examples for you.

Here is the Theorytab of “Blank Space” by Taylor Swift, a song written in a major key:


Click play below to see and hear how the chords and melody change when “Blank Space” is transposed to minor.


Major and minor are interesting, but the other less common modes have their own cool sound too. Here is “American Pie” by Don McLean, another major song:

Now listen to how it sounds in the dorian mode.

Transposing any of the 12000+ songs in the Theorytab Library into new modes and keys is super easy: on a tab page, click the “key” button and select the key and mode you desire, as shown below: 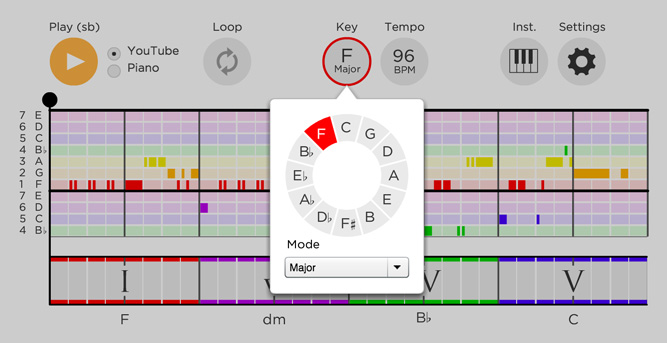 Some songs sound amazing in different different keys/modes, while others… not so much. Explore the Theorytab library to find the ones that sounds that best and let us know what you find!