Music theory can feel intimidating… until you break it down into the basics. It turns out, all you need to understand are 7 notes to start analyzing and comparing music. It’s that simple! 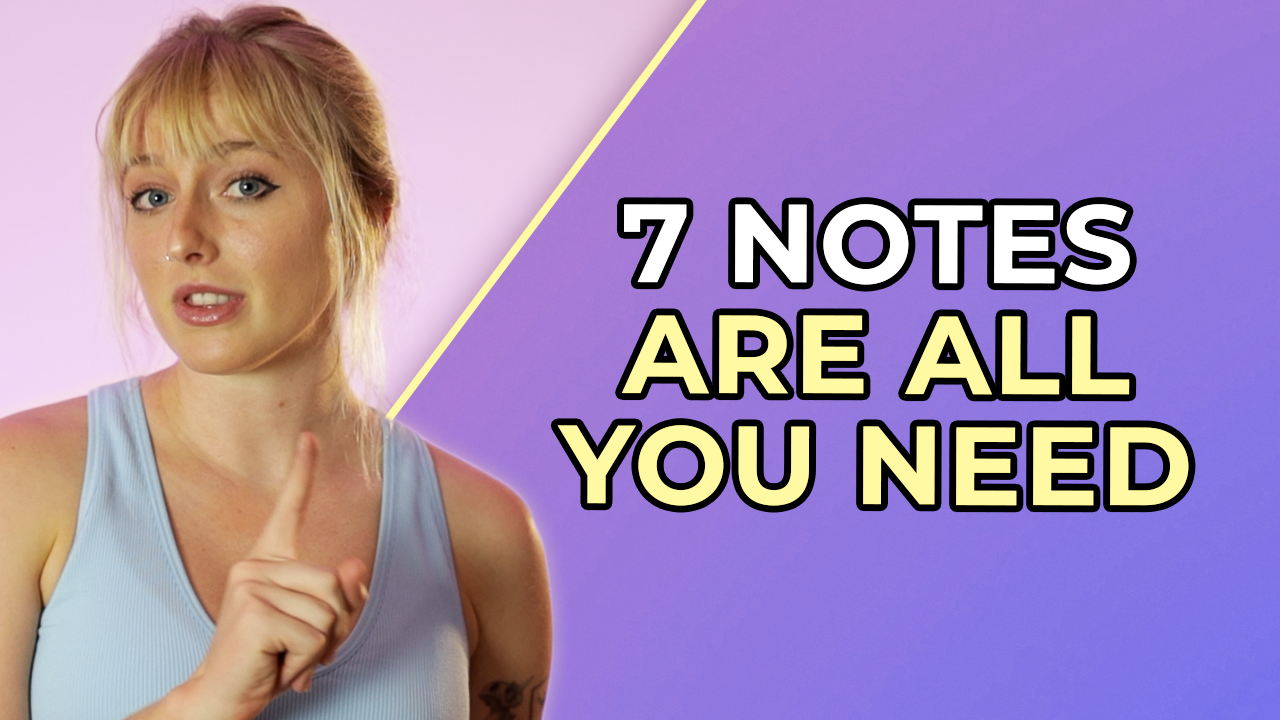 If you want to write your own songs or produce music, it’s essential to learn how great songs are built. While learning music theory can seem intimidating at first, it’s actually quite simple to jump into.

To begin comparing and analyzing music, all you need to understand are 7 notes. You can do that!

What is music theory?

Music theory is simply the study of how music works. It’s a collection of concepts that help musicians understand, analyze, and write music together.

If you see music theory only as a set of rules that dictate how to write music, it can feel limiting. But if you understand its true purpose — to give us the necessary tools to craft and understand great songs — it’s clear that learning music theory is worth your effort.

Introduction to the 7 notes in music (and the major scale)

Almost all music is made up of just 7 notes, and in this post, we’ll look at those 7 notes as they relate to the major scale.

The major scale is a set of 7 notes that follow a specific pattern that humans happen to really love.

You’ll often see the major scale demonstrated in the key of C major. This means that the pattern begins with the note C on the piano.

Comparing a song in C Major and D Major

Together, these seven notes can be used to create a full song in any key you like.

Let’s look at “Don’t Stop Believin’” by Journey in the key of C major and then in the key of D major. Remember, the key simply tells us first note that the scale begins on in each version.

While the songs are made up of different notes on the piano, and the second version sounds a bit higher, notice how the versions feel the same.

It turns out, comparing the versions by looking at the names of the notes doesn’t tell us very much. After all, who can tell at a glance that the melodies below are the same?

Although the actual notes on the piano change between the two versions, their positions in the scale stay the same. Below, each note’s position in the scale is notated using numbers 1 through 7.

It turns out, the name of a note and the key it’s in aren’t super important — it doesn’t tell us much about how a song will act or feel, on its own.

Instead, we can learn a lot from looking at notes’ relative position in the scale. This allows us to study the relationship between notes in a scale, and across songs, no matter what key they are in.

To put it simply: if you know these seven notes, you are well on your way to understanding music as a whole.

Our colorful notation is featured in our books, our songwriting editor, and our song database which shows you how real songs are built.

While music theory as a whole can seem intimidating, all you need to begin understanding music on a deeper level is an awareness of the 7 notes that make up all of music.

While there’s a lot more to get into, like how notes form chords and melodies, we’ll cover that in other posts. For now, check out our song database and pay attention to the scale degrees and colors. You’ll be comparing music instantly!