Recently, we used our user-driven database of over 30,000 song analyses to create a visualization of the most popular chords, transcribed in C major. We’ve invited some of our favorite artists — Seids, DAMOYEE, and Venus Theory — to use the chart (with a twist) and write some music. 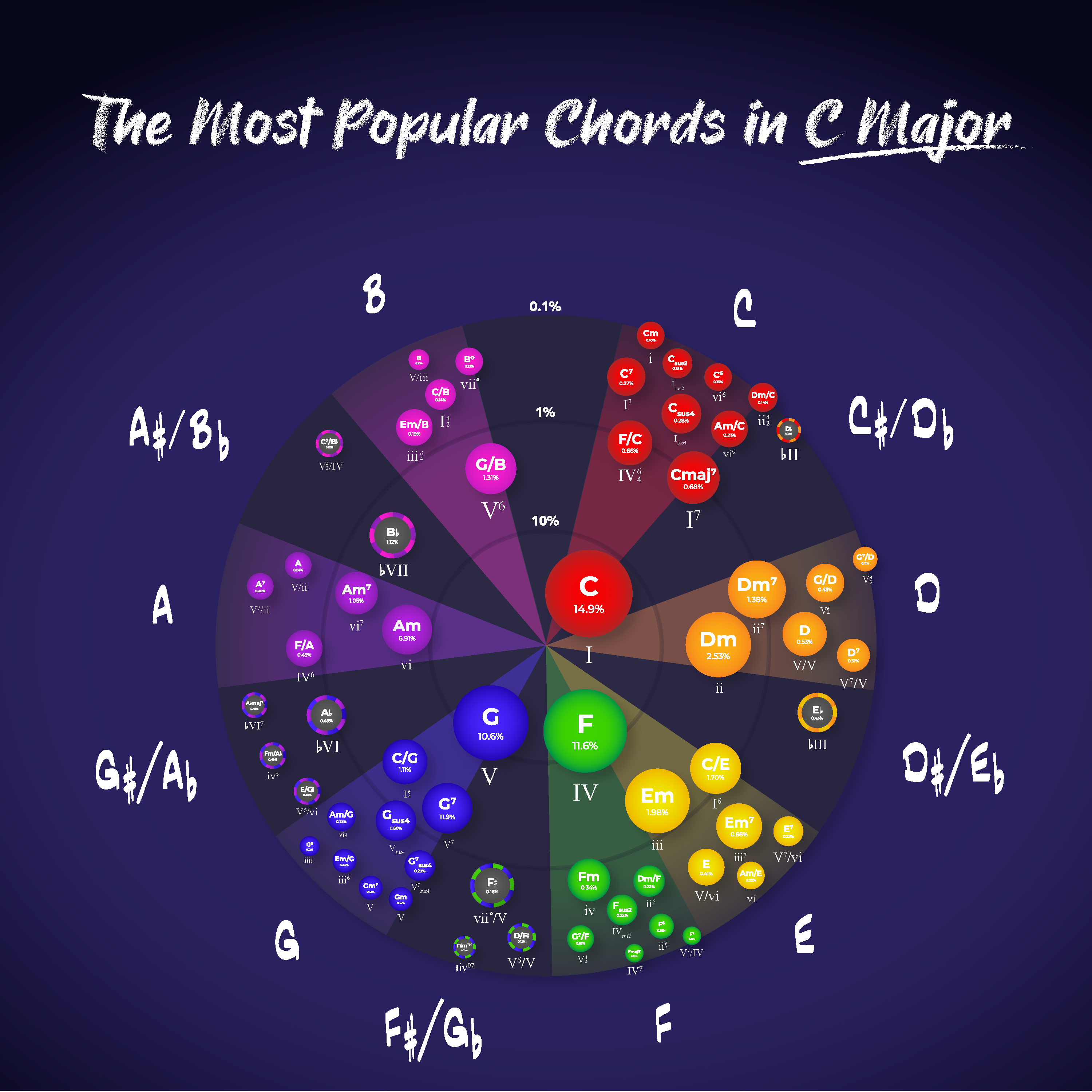 The Most Popular Chords

Hooktheory’s user-driven database of over 30,000 song analyses has become an incredible resource for understanding how chords are used in popular music.

Among other things, it serves as a source of our chord AI recommendation tool in our songwriting sketchpad, Hookpad, and for all the puzzles in Chord Crush, our ear training app.

We can also use it to highlight interesting insights and patterns that show up in music. For example, below is a visualization we recently created that uses the database to visualize the most popular chords, transcribed below in C major.

We’ve grouped chords by their bass notes and placed and sized them according to their popularity; chords that are larger and closer to the center are used more often in the songs across our database, while those that are smaller and further away from the center are used less frequently. Along with their names, we’ve also labeled them by their Roman Numeral to reflect their function. (You can dive into these different notation types and other fundamental music theory concepts in our books).

In the past, we’ve hosted a series of fun songwriting contests, and we realized the chart above could make for a great constraint to organize a new challenge around. There are a lot of possibilities, but here’s what we came up with for the first challenge:

Write a song using chord progressions that move in a clockwise or counter-clockwise path around the chart.

To give our challenge a try, we invited a few of our friends in the songwriting community to come together and write some music: Seids, Venus Theory, and DAMOYEE.

Sabrina, also known as Seids, is a professional singer who taught herself how to produce during the pandemic. She shares music production tips on social media to a loyal audience across YouTube, TikTok, and Instagram.

Cameron, also known as Venus Theory, is a self-taught sound designer and music producer who shares tips on how to produce and demonstrates you don’t need to spend thousands to create something great.

DAMOYEE is a multi-hyphenate artist who plays over 15 instruments. She shares her music on social media while balancing life as a full-time student at Berklee College of Music.

And last but not least, one of our talented founders, Ryan, put his skills to use to test out this challenge himself.

Let’s see what each of our contestants came up with!

Seids was the first artist to tackle the challenge. Her focus was on keeping it simple — after all, many songs only use a couple of chords and sound great.

Take a look for yourself — check out our trends tool to start typing in your chord progression and watch songs with that progression populate.

She layered in several elements to create an effective composition: whimsical vocals, multiple instruments, and longing lyrics. Ultimately, she created a wonderful pop piece that could appeal to a massive audience.

Ryan, one of our founders, was up next. He chose to reimagine the theme song from Chord Crush, our ear training app here at Hootheory.

Ryan’s strategy was to create a clockwise, ascending progression. He had a hunch that the other artists may use counter-clockwise progressions, which are in many ways more popular. Plus, he pointed out that ascending baselines can create an uplifting, momentous feeling.

F is a so-called cadence chord, meaning that it transitions nicely back to C.

Ryan’s composition repeated this chord progression three times. For the fourth progression, he chose to mix it up a bit:

Ultimately, he chose to play his composition on the piano. As Venus Theory described it, the piece was made up of a triumphant melody, lots of uplifts, and, finally, superhero chords to end the composition.

She chose to begin her chord progression with C major and like Ryan, worked clockwise down the chart, making her way to B♭, and using all flats along the way.

Next, she focused on layering instruments like drums, piano, and electric guitar, along with lyrics and vocals. The result was awesome.

With a fresh cup of coffee in hand, Venus Theory got to work on his composition. His goal was to veer away from what may be “predictable,” beginning his progression with B♭.

Cameron utilized parallel keys and parallel modes — in this case, borrowing chords from the minor scale while writing in the major key — to create an even more interesting progression:

Cameron added additional interesting layers to his composition with plugins, synthesizers, and sample libraries to create a cinematic soundscape.

While everyone was given the same challenge, the final compositions created by our artists were completely different in sound, feel, and style. There’s so much to take away from each artist’s unique direction.

Artificial constraints like this, aside from being fun prompts for a contest, can be a useful way to overcome writer’s block and create a path forward. While our first challenge with this chart involved a specific path, there are endless opportunities to create constraints and start interesting new progressions.

To get started writing your own progression, try pulling up the chart in one window and the trends tool in another. You can begin to build a progression and study the songs that have used it in the past, or jump into Hookpad and start laying down your chords directly to hear how they sound in real-time.

We had a wonderful time working with Seids, DAMOYEE, and Venus Theory. Be sure to check out their social media channels below: