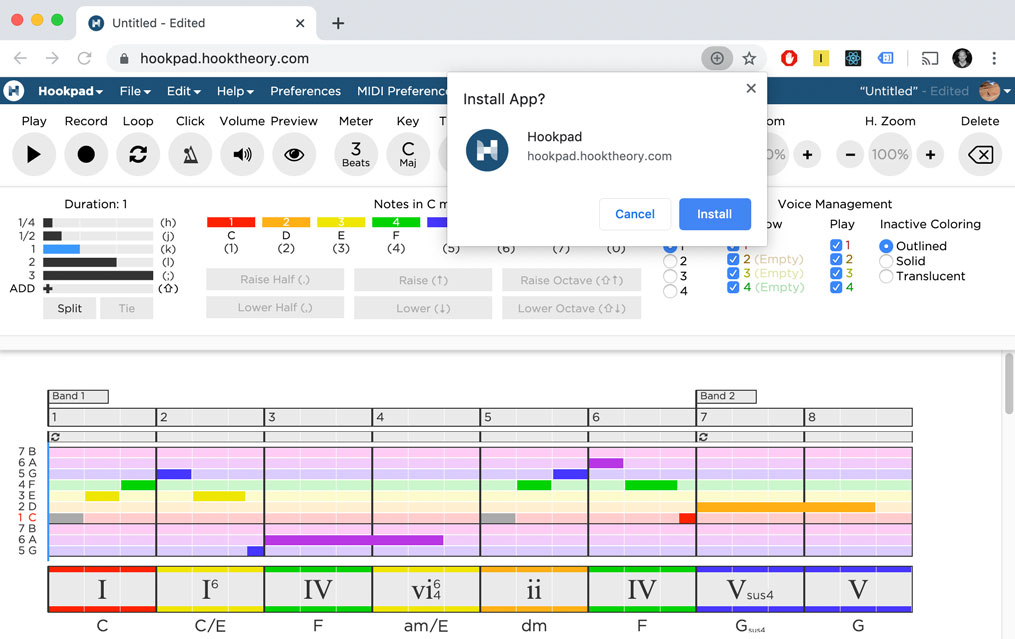 Today we released a big update to Hookpad that we’re really excited about! Hookpad is better in three big ways:

Once you download an instrument it will be cached, and when you visit the site in the future it won’t need to be re-downloaded. This saves on bandwidth and load times and makes Hookpad feel generally more snappy.

Open (https://hookpad.hooktheory.com) in your browser even when you don’t have an internet connection. Assuming you’ve been to the page before, it will work (instruments you’ve used in the past will be available for use, etc.). How does this work? It’s based on a new web technology called Progressive Web Apps that allow your browser to store a robust cache of opt-in web pages for offline use.

Hookpad Can Now be Installed on Mac and Windows

To install Hookpad on macOS or Windows, open Hookpad in Google Chrome (this does require Chrome), click on the options icon in the top right of the browser window (three vertical dots) and you will see “Install Hookpad”. After it is installed it will appear as an app on your computer (you can put it in your dock/task bar, and it will open in its own window).

When using Hookpad without a network connection, sounds that have not been cached for offline use have a lighter color.

The band editor now shows if any sound patches fail to load. Below “Bright Pad” and “Dark Bass” failed to load. Clicking the yellow warning icon attempts to load all failed sound patches.

We are so pumped for this release. I can’t tell you how many times I’ve wanted to use Hookpad offline and now I can! I’ve already got Hookpad installed as a native app on macOS and don’t know if I’ll ever use Hookpad in the browser again!