How do we judge a chord to be more or less complex? A good way to understand complexity in chords is to start with the seven most basic chords in any key, the so-called “primary chords.” These are the seven chords that are featured in the Hookpad chord palette and taken together, represent the majority of chords found in popular music.

Each chord above contains 3 notes and is built from degrees of a scale skipping every other note. For example, a C chord has the notes C, E, and G, the 1st, 3rd, and 5th notes of the C Major scale. 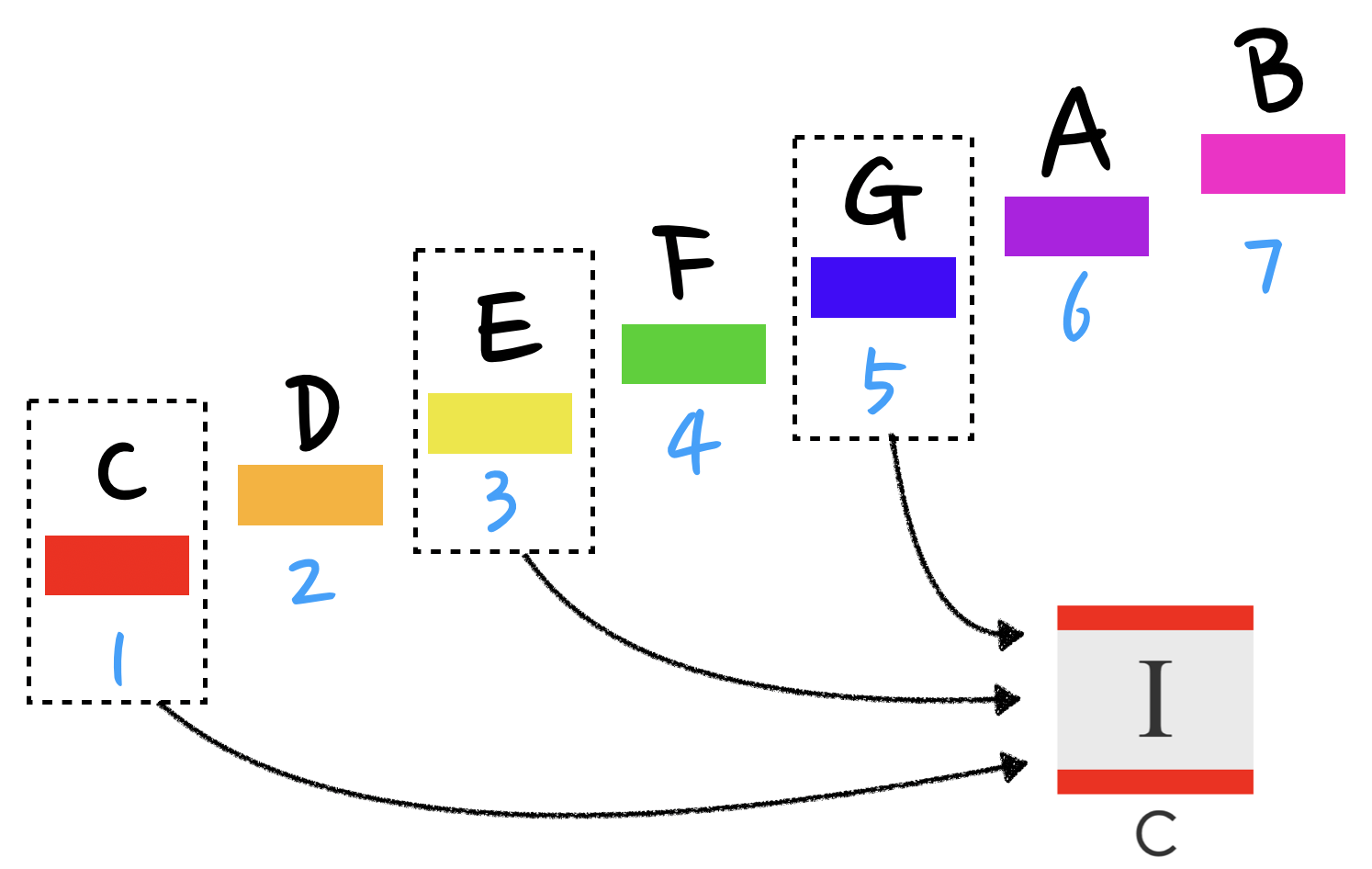 There are fundamentally two metrics that we consider when judging the complexity of a chord relative to the basic ones above. The first is whether the chords contains additional notes beyond the 3 that form the primary chords described above. Adding notes to a chord increases its complexity because it increases the number and nature of intervals or note interactions that our ear must process. A Cmaj7 chord, for example, is similar to a plain C chord, except it has an additional note: B. In addition to the intervals C — E, E — G, C — G, we now have twice as many when we add C — B, E — B, G — B. The nature of the intervals is changed as well; C — B is called a 7th (as there are 7 notes counting from C to B along the scale), and this interval didn’t exist previously. 7ths are more dissonant than the 3rds and 5ths of the plain C chord, and so our ears perceive this as more complex. Other examples of chords with extra notes are Sus2/Sus4 chords, and add9, 9th chords. Songs that have these chords in them will be judged to have more chord complexity than one that does not.

The second factor we look at is whether a chord contains notes that lie outside of the scale of the song's key. Our ears naturally expect to hear notes in the scale so chords with non-scale tones tend to sound more exotic and complex. Chords that do this are often called borrowed chords because they are using tones they’ve “borrowed” from a different scale. For example, in the key of C major, the 4th chord is normally an F major chord. If instead, we consider the key of C Minor, the 4th chord is an F minor chord. Using an F minor chord in a chord progression that is in the key of C major will sound more complex because our ears simply aren’t expecting it (the same is true for using an F Major chord in a song that is in the key of C Minor). Other examples of chords that contain non-sacle tones are secondary chords, and chords with certain non diatonic alterations (#5, b9, etc.).

A melody, at its heart, is a sequence of notes sung or played with specific timings. In “Western” music — a label that describes the bulk of popular music — melodies are based on 7-note scales called “diatonic” scales, like the Major or Minor scales. Whether these scales are simply cultural artifacts stemming from centuries of music doing it this way or rather they are derived from something more fundamental (falling naturally from the laws of nature) is a topic of continued debate.

In either case, it’s almost certain that most of the melodies that you know by heart are based on the 7 notes in one of these scales. For this reason, melodies that use notes outside of the scale create an added complexity. Often these “non-diatonic” notes create dissonance that isn’t available within the normal diatonic notes and require more care in creating a melody that is coherent. In Hooktheory's color notation, non-diatonic notes are labeled with hashed colors.

Melodies can also have rhythmic complexity. Notes that are timed with the beats of a song are often perceived as more natural, whereas notes that occur off of a main beat (an “off-beat”) sound more rhythmically complex. Melodies that rely on a large number of off-beat rhythms are called syncopated, and can often give a song a more complex, groovy feel.

When a melody is played over a chord progression, their interaction is one of the most important aspects of a song. When a note in the melody is contained in the chord, (for example, the melody note C over a C Major chord, which contains C, E, and G), it creates a sense of stability. If this note is not contained in the chord (for example, the note D over a C Major chord), it creates a sense of instability and tension. In many examples in using Hooktheory notation, you can show which notes are contained in every chord by clicking the "Guides" button. Shown below is a simple chord progression with stable notes highlighted in the note region.

Tension, in moderation, is a good thing in music. Melodies that stick to only stable notes over their chord progressions (think “Twinkle Twinkle”), may sound safe, but they are also not very ambitious. On the other hand, melodies that use only unstable notes will sound dissonant and cacophonous. The middle ground involves crafting melodies that intentionally build and release tension at all the right moments.

You’ve probably heard a song somewhere and thought to yourself, “this song sounds just like this other song I know!” With a limited number of chords in the universe, it’s inevitable that the same chord progression is going to be featured in multiple songs. Chord progressions are only one part of a song, and there’s absolutely no reason not to reuse effective ones.

At Hooktheory we keep detailed statistics on the most commonly used chord progressions and chord changes, and we are always impressed to see songs using familiar chords in creative and exciting new ways.

Every chord has a bass note, which is the lowest note in the chord. When the bass notes defined by a chord progression ascend or descend in a stepwise manner (like C → D → E), it creates an additional layer of continuity in the progression that helps it flow. But creating a chord progression that is effective in its own right, compatible with the melody, strikes a good balance of chord-melody tension, AND has an ascending or descending bassline can be a tall order. Crafting chord progressions that do this is an art, and at Hooktheory we enjoy marveling at the brilliance of some songwriters who manage to put all of these pieces together simultaneously.

In Hooktheory notation, chords are colored by the color of their bass notes, so chord progressions that have stepwise ascending or descending bass melodies will follow a rainbow pattern.